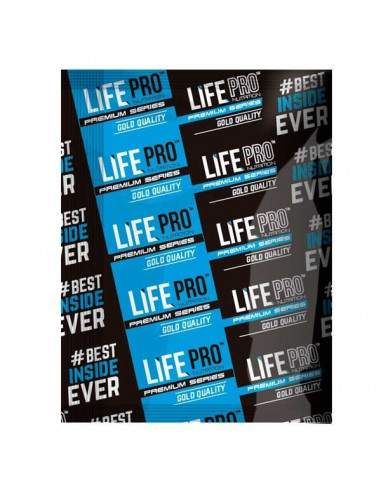 It is the professional pre-workout par excellence with a formula designed milligram by milligram for serious athletes looking to do a hard and effective workout without then taking the pre-workout home with them preventing a proper rest.

What is Life Pro Elektro?

All the quantities of its active ingredients are based on the premise of minimum efficient dosage, thus reaching some of the highest dosages on the market in this type of product. The customer remains loyal from the first training session.

Complex precursor of cognitive function while delaying the onset of fatigue:

At the same time the formula is complemented with Bioperine to promote the absorption of the product.

What is Life Pro Elektro for?

Life Pro Elektro is a food supplement that will help improve our performance sports in each workout. In addition, through its advanced formula, ¡does not cause energy peaks!

It does not produce overexcitement or excessive discomfort, and after its effects, does not cause sudden and radical fatigue, in contrast to what happens with other pre-workout formulas on the market.

Life Pro Elektro is much more than a pre-workout. Through its combination of 12 bioactive compounds working in special synergy, we achieve a triple action effect.

In addition, you can choose between its refreshing flavors: watermelon, lollipop and cola.

https://www.lifepronutrition.com/en/pre-workout/life-pro-elektro-monodosis-20g.html 8533 LIFE PRO ELEKTRO MONODOSIS 20G <p>It is the <strong>professional pre-workout par excellence with a formula designed milligram by milligram</strong> for serious athletes looking to do a hard and effective workout without then taking the pre-workout home with them preventing a proper rest.</p> https://www.lifepronutrition.com/644-home_default/life-pro-elektro-monodosis-20g.jpg 2.9 outofstock LIFE PRO NUTRITION 2.9 2.6364 0 0 2021-05-17T12:30:40+0200 /PRE WORKOUT
Tap to zoom