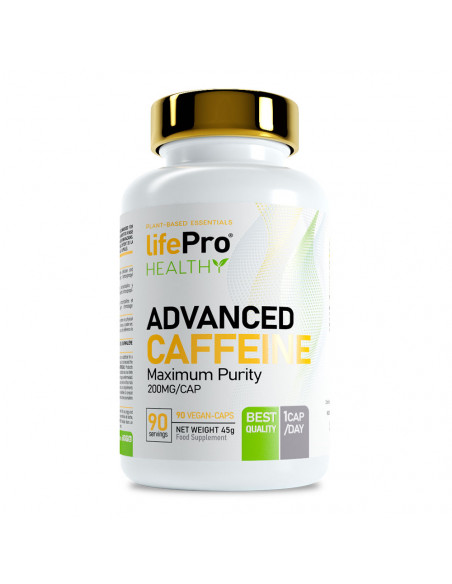 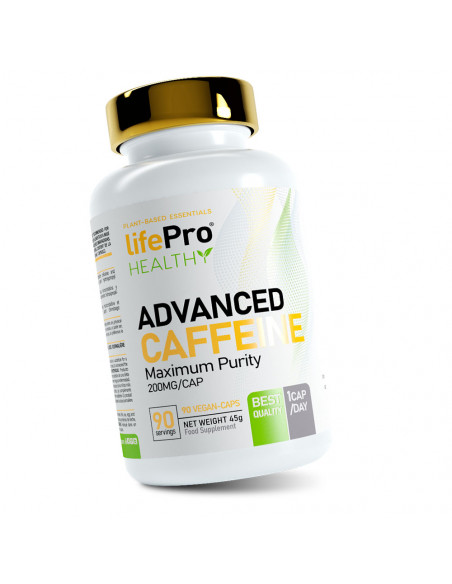 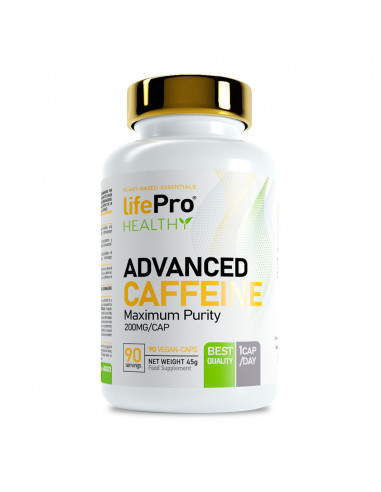 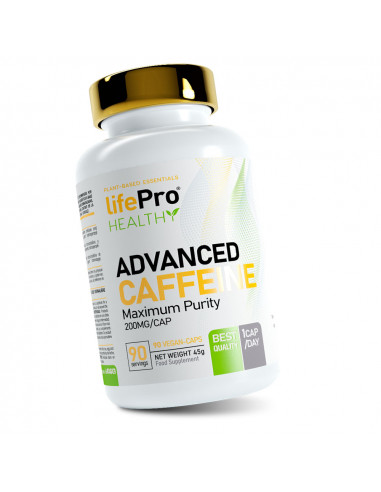 Life Pro Advanced Caffeine is composed of caffeine anhydrous, and has been designed to be consumed before the start of any physical activity in order to increase strength and endurance while avoiding muscle fatigue. Another additional benefit would be to promote lipolysis and, in turn, enhance weight loss and body fat burning.

Caffeine is an alkaloid that acts as a central nervous system stimulant substance; we are used to believe that it can only be extracted from coffee, but this substance is also found in other substances, such as guarana.

Caffeine is a substance that stands out mainly for its stimulant capacities of the central nervous system. It is an alkaloid that is part of the xanthine family, a group of substances that have stimulant properties and that can be found naturally in some plant species together with theophylline and theobromine, which are present in coffee, tea, cocoa, guarana berries and the kola nut.

In general terms, it is characterized by postponing the onset of fatigue and drowsiness, as well as increasing alertness.

Caffeine is used to increase physical performance in strength, endurance or high intensity sports. Its use promotes fat burning and is capable of increasing the intensity of the work performed.

Life Pro Advanced Caffeine 200mg 90 vegan capsules will be one of your best allies to increase your energy and get the best results from each workout.

This product provides 200mg of caffeine anhydrous in each intake.

What are the Benefits of Life Pro Advanced Caffeine?

Increases performance in endurance and strength sports by inhibiting adenosine, a receptor that causes us to feel fatigued.

It helps to increase energy levels and delay the feeling of tiredness. It is one of the natural substances most present in the pre-workouts of many sports, because of its great usefulness and benefits.
It acts as a thermogenic. It is common to consume caffeine when the objective is to lose fat. It can help weight reduction if combined with a caloric deficit diet and a correct physical activity.

It stimulates the CNS (central nervous system), so it increases performance; not only physical, but also cognitive processes and concentration. In addition, it can boost your energy levels during the day and allow you to face daily activities in a better way.

Increases concentration, due to the fact that caffeine itself acts by increasing mental focus and concentration.
Improves alertness and cognitive function. It is commonly used for driving, studying, working, etc.
Thanks to the fact that it is a substance that releases endorphins and dopamine, it also has an antidepressant effect.
It contributes to delay the feeling of fatigue and therefore to increase performance.
It increases the cardiac and respiratory rhythm.

It delays fatigue, reduces the sensations of pain and allows an increase in effort and power, also enhances the ability to oxidize fatty acids, provides energy and increases the ability to concentrate.

How long does it take for Life Pro Advanced Caffeine 200mg to take effect?

There are several types of caffeine, and depending on the characteristics of each one, its absorption and assimilation time by our organism is different. The caffeine contained in this Life Pro Coffee Booster supplement is specifically caffeine anhydrous.

This term refers to the fact that it is a type of dehydrated caffeine, which means that it does not contain water. Thanks to this factor, this type of caffeine is one of the fastest absorbed.

In a short period of 5 to 10 minutes it is possible to begin to feel its effects.

How does caffeine act in the body?

Caffeine inhibits the adenosine receptors, since it has a molecular structure very similar to theirs, specifically the A1 receptors (located throughout the central nervous system). Caffeine provides its stimulant effects and the characteristic excitation thanks to the liberation of the tonic inhibitors of dopamine, and the A2A receptors located in high regions in dopaminergic neurons.

Depending on the individual and his tolerance to caffeine, the effects of this substance will be more or less noticeable.

For its elimination, the organism will need a longer or shorter period of time, depending on decisive factors such as age, physiological state, tolerance to the substance, the amount ingested, whether it has been combined with medication, etc. The average time is between two to eight hours until complete elimination.

No, caffeine does not interfere with fasting. Caffeine is a substance that does not contribute any calories, since it does not contain any macronutrients in its composition. It is completely suitable.

During the fasting phase, it is important to avoid consuming anything that raises insulin levels (carbohydrates and proteins). In order not to break the fasting state, if we choose coffee, it should not be combined or mixed with sugar, milk, etc.

This supplement is compatible with intermittent fasting.

When is it advisable to take caffeine?

It is not advisable to take caffeine close to night time due to its interference with rest and sleep conciliation.

Take one 200mg capsule before the training session, preferably in the morning.