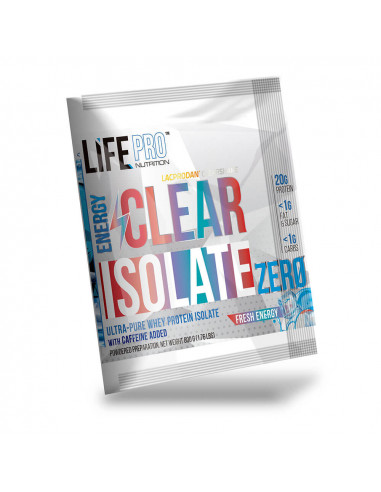 Life Pro's Clear Isolate Zero Caffeine is a protein isolate supplement that has been combined with caffeine anhydrous for a complete, novel and ideal formulation for people who want to increase their energy levels.

What is Clear Isolate Zero Caffeine

Clear Isolate Zero Caffeine has an 81% concentration. It has been used protein isolate from Arla Lacprodan Clearshake whey, it is a patented formula, of high quality and purity, without lactose, sugars or added fats.

Clear Isolate Zero Caffeine is a patented formula, of high quality and purity, without lactose, sugars or added fats.

Protein is essential in the diet of all people who include physical activity in their daily life and who want to take care of their diet. Life Pro Clear Shake has been designed in 2 different flavors: Cola and Energetic Drink.

To achieve this innovative formula, the protein has been combined with a source of anhydrous coffee: a type of coffee that is rapidly absorbed, one of the most widely used in sports due to its multiple benefits and properties.

It is the ideal supplement for people who want to get the amount of daily protein, increase their energy levels and enjoy a refreshing and very light shake.

What are the benefits of Clear Isolate Zero Caffeine?

The protein chosen for the formulation of Clear Isolate Zero Caffeine, is a source of isolated protein, high biological value and has the Arla Lacprodan patent. Its innovative clear texture, is light and much more versatile than conventional protein shakes.

Protein is one of the three macronutrients, which has structural functions and is essential in the diet of physically active people: protein helps build muscle mass and recovery after workouts and maintenance of muscle mass. It is especially important for athletes to reach their daily protein requirements in order to obtain the best results and achieve their goals.

It has a very low contribution in carbohydrates and fats, is a source of high purity, with 81%, and a particularly low fat and carbohydrate content.

It does not contain lactose as it is an isolated protein source, in which most of it has been eliminated.

Sucralose and its flavors:

Clear Isolate Zero has been sweetened in its 2 different flavors with sucralose.

Sucralose is a natural sweetener.

Sucralose is an artificial sweetener that was discovered more than 40 years ago and its use in the field of fitness and sports supplementation is due to its safety in human consumption and that it does not provide heat to the body.

Sucralose is an artificial sweetener that was discovered more than 40 years ago and its use in the field of fitness and sports supplementation is due to its safety in human consumption and that it does not provide heat to the body.

Sucralose is an artificial sweetener that was discovered more than 40 years ago and that its use in the field of fitness and sports supplementation is due to its safety in human consumption and that it does not provide heat to the body.

This sweetener has the ability to sweeten between 500 and 600 times more than conventional sugar. It is obtained from sucrose. It does not alter glucose or insulin. It is one of the safest sweeteners for human consumption.

It is a sweetener suitable for diabetics because it does not influence blood sugar concentration.

In oral health care: the appearance of tooth decay because bacteria can not decompose this sweetener. Tooth enamel will remain in optimal conditions.

Coffee anhydrous is one of the different types of coffee that exist, which is characterized by its rapid absorption and effect. Each dose provides 120 mg of coffee.

This type of coffeeína, is one of the most used especially in sports: it is absorbed in an average of 20 minutes and reaches its maximum peak in blood in between 30 and 60 minutes.

Among the main benefits of caffeine, it helps to increase energy levels, increases strength and helps to improve performance, helps to postpone the feeling of fatigue, improves mental focus and also has a thermogenic effect.

Clear Isolate Zero Caffeine has an unbeatable quality and purity of its composition, as it has been designed and produced under the highest quality standards. Its 81% protein content positions it as one of the purest protein isolates on the market.

Its low content in other macronutrients: It contains less than 4% carbohydrates and 1% fat. It contributes to achieve the best results, physical and performance especially for the most demanding athetes.

It contains less than 4% carbohydrates and 1% fat.

Clear lsolate Zero Caffeine has been designed in 2 delicious flavors that allow you to enjoy the most refreshing flavors, with its light and versatile texture that characterizes this Clear protein.

For whom is Isolate Zero Caffeine recommended?

Clear Isolate Zero Caffeine is the ideal supplement thanks to the purity of the protein it contains. It facilitates digestion for all those people with stomach difficulties or discomfort.

Clear Isolate Zero Caffeine is the ideal supplement thanks to the purity of the protein it contains.

Clear Isolate Zero Caffeine is a protein supplement that is suitable for all those people who:

are suffering from stomach problems.

¿When to take Isolate Zero Caffeine?

Clear Isolate Zero Caffeineis a recommended protein supplement that can be consumed at any time of the day when an extra protein and caffeine intake is needed.

High content of caffeine: Not recommended for children and pregnant or breastfeeding women. (40 mg / 100 ml). It is recommended to avoid its use in hours close to sleep, especially in those sensitive to caffeine.